What follows are some of the books that have formed my understanding of the complex man who was Ulysses S. Grant. Some of them actually would not support the opinion that Grant was at all complex. And some of the books listed below probably are not too happy being next to each other on my bookshelf, but they are the main ones I’ve read. Of course if one were to look at the bibliographies of any of the Grant studies cited below, they would find many, many works that a more thorough examination of Grant would consider. 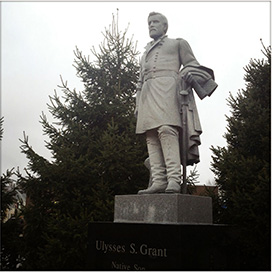 As stated above, even this very limited set of Grant studies listed here is not unanimous in its assessment of Grant as both a military and political man. In a broader context, many works about Grant seem (maybe begrudgingly even) to accept that he won the Civil War but that the personal characteristics (and for some, merely the superiority of numbers in the Union armies) that allowed him this victory were not suited to success as a President. But for me, I feel a pretty steady progress (last 30 years or so) among historians in restoring the reputation of a man who was admired and even loved not only in the US, but throughout the world when he lived, but who for a good part of the 20th Century was severely criticized or – maybe even more insulting to Grant – just ignored. (Of course there were also those who opposed and mocked him during his Presidency.)

One restoration of Grant however that is consistently applauded is that of his Tomb in New York City. Frank Scatorro is to be greatly thanked for his commitment to this work. I was fortunate to be able to attend the rededication of Grant’s Tomb in 1997. It is a beautiful monument and tomb. I have lived in the Washington, DC, area for 30 years and continue to be impressed and moved by its monuments. I had a couple of easy (well, safe) tours on a destroyer in the South China Sea during the Vietnam War and so (perhaps with a bit of guilt) I am drawn to the Vietnam Memorial most strongly. But Grant’s Tomb is magnificent (Grant’s Tomb).